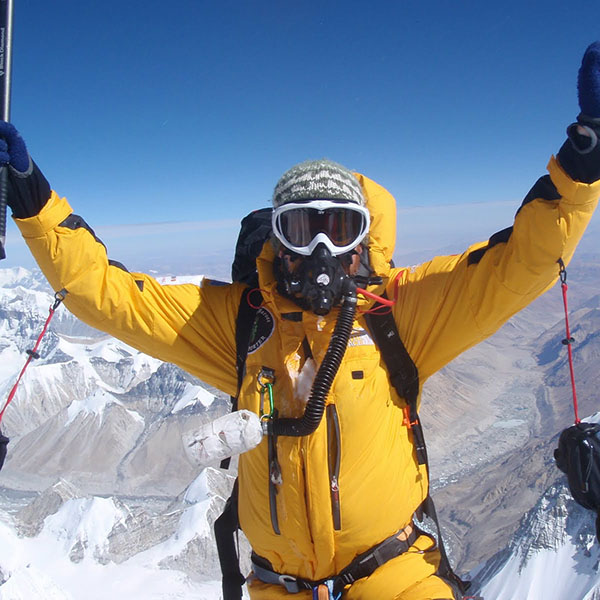 SKU:
£0.00
Unavailable
per item
Adventurer, Motivational Speaker, Charity Fundraiser
Add to Cart
Pete Sunnucks has packed a significant amount into his short life from travelling extensively all over the world to graduating with a Masters of Philosophy in leadership and management.

When his close friend Lt John Thornton RM was tragically killed in Afghanistan in 2008, Pete united with his best friend Captain Matt Snook RM, another of John’s close friends, to pursue the extra-ordinary with the sole intent of fulfilling a life-long ambition in honour of their fallen friend.

On 23 of May 2010 Pete and Matt summited the highest mountain in the world, Mt Everest, via the treacherous and historical North Ridge Route. They became the first people to do so for Help for Heroes and the John Thornton Young Achievers Foundation.

It was through the Air Training Corps Junior Leaders Course, recognised as the UK’s toughest youth military leadership course, that he met John Thornton, and they forged a strong friendship. John’s death hit Pete hard and with so many of his other close friends serving, it is no surprise how driven he is to raise money for the Help for Heroes cause and the John Thornton Young Achievers Foundation(JTYAF).

The JTYAF was setup in memory of John to help talented young people achieve their ambitions and climb as high as they can dream. Pete has so far raised in excess of £26,000 for them both.

Pete’s journey to the top saw set-back after set-back and demonstrates an utter determination to succeed against adversity, as well as leadership, teamwork and a shared belief in a core purpose. Pete and Matt survived hypoxia, pneumonia, pulmonary and cerebral oedemas, crevasses, white-out blizzards and the constant risk of avalanche, but against all odds and against medical advice they still managed to touch roof of the world.

Pete has his sights set on his next adventure, organising a joint-services expedition with his close friends to Antarctica in winter 2014. The mission is to ascend an unclimbed mountain and to rename it after the late John Thornton, ascent of Mt Vinson and finally journeying to the South Pole unsupported. This tri-polar adventure is the first to be undertaken on most inhospitable continent and will aim to raise significant funds for the JTYAF.

Pete is a Fellow of the Royal Geographical Society and has a passion for exploration and adventure. He has now stood on top of three of the Seven Summits, the highest mountain on every continent, including: Mt Aconcagua, Mt McKinley and Mt Everest, with the aim of completing the remaining within the next two years.

He is currently in training for an Ironman next year and enjoys skiing, surfing and travelling. He is also proud to be an ambassador for Help for Heroes and the John Thornton Young Achievers Foundation.

Pete balances his adventures with maintaining a fulltime job as an Aerospace Project Manager for a World renown business, leading multi-disciplined teams working extensively on the F-35 Joint Strike Fighter and other various high profile projects.

He is not an accomplished climber or mountaineer; he is simply an ordinary guy achieving extra-ordinary things.

Speaking Topics Include
Pete’s on-stage delivery mirrors the teamwork, passion and professionalism they had to show on the mountain in order to achieve their dream, but more than that he speaks with a humility and honesty which really engages his listeners and encourages them to take the next step to fulfilling their own dream.

​Pete’s charming and humble approach engages audiences from the outset. He will inspire and instill a new sense of belief, whilst offering important powerful messages to all. Comfortable speaking to any age group of any size, Pete has captivated audiences from schools and businesses alike.  As well as telling their story, much of his talks revolve around the critical importance of the key leadership qualities, qualities that have fuelled his success, but more importantly kept him alive.

Hearing Pete speak is truly inspirational. Pete and Matt are both living proof of the old adage “there’s no such word as can’t”. I have every possible respect for his talents as a speaker, delivering a truly amazing insight into their adventures, as well as their incredible personal courage…fantastic.

Pete and Matt captivated the entire audience of healthcare professionals with his deeply moving story when they presented at our Gala Dinner held at Fawsley Hall in Northamptonshire.  An inspirational story of courage, leadership and friendship and I remain in awe of their bravery in overcoming the many difficulties that they experienced in order to achieve their goal. They dared to dream……..

I just wanted to drop you both a note to say how truly grateful we are that you presented at our conference yesterday.  You are absolutely amazing guys, and have been an inspiration to the people that attended, there were grown men in the audience that had a tear in their eye. Your story is one of true commitment and dedication, I just want to know when you are visiting the queen to get your MBE

I just wanted to say thanks again for adding a completely different perspective to our conference today. We have had a lot of positive feedback from the team, your inspirational story delivered in such a heartfelt way really hit the spot. Absolutely tremendous!

The team were impressed & inspired by the tales of your adventure and the reason for commencing the journey you undertook – physical and psychological. We applaud you for your bravery, loyalty to your friends and each other, your sheer determination and your zest for life.

Part of Pete’s fee will be donated to the JTYAF.
Check Availability via Email