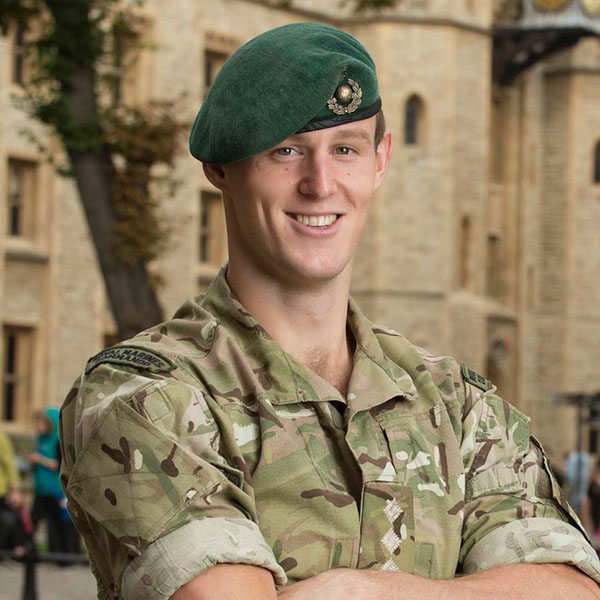 SKU:
£0.00
Unavailable
per item
Former Professional Athlete, Royal Marines Officer and Afghan Cultural Expert
Add to Cart
Owen Davis was a professional athlete at the world-famous Leander Club, best known as the home of Legendary Olympian Sir Steve Redgrave, when his dreams of competing at London 2012 were cut short by a severe back injury.

He immediately applied to become an officer in the Royal Marines and, after talking his way through ‘rigorous’ medical examinations, was selected as the youngest of 60 members of the 2008 Young Officer Batch.  Despite two stress-fractured lumbar vertebrae he successfully passed the arduous 15-month Commando Course and joined 42 Commando as a Close Combat Troop Commander.

However, it was as a 23 year-old Captain serving an 11-month tour as a Cultural Advisor in Afghanistan’s war-torn Helmand Province that Owen found his niche; mentoring a rogue group of Afghan Local Policemen. Credited with ‘turning the hope for a functioning local police force into a reality’, his influence was such that his commanders tore up the cultural advisors’ rulebook and granted Davis ‘artistic license’ to live as an Afghan.

Despite increasing fears of ‘green on blue’ attacks against Western mentors, Owen fully immersed himself in the culture of his Afghan unit, sharing their food and sleeping quarters, becoming fluent in their language and gaining their trust. More significantly, he led them from the front during a summer that saw some of the fiercest close-quarters fighting of the campaign. It was for this ‘exemplary gallantry and leadership over a sustained period’ that Davis was awarded the Conspicuous Gallantry Cross, a military decoration for bravery second only to the VC.

Touted by British Media as a ‘Modern day Lawrence of Arabia’, Owen is currently in discussion with a major television company to front a documentary on the Afghan people. Still only 25 years old, he is scrabbling to balance media and speaking commitments with the heavy workload of a first year medical student and training for the 2014 Mongolia Action Asia Ultramarathon.

Media Coverage
Speaking Topics Include
Offering a unique perspective based on his time living and fighting with an isolated and often unpredictable Afghan Militia, Owen will enthral the audience with a keynote providing guidance on leadership and cross-cultural relationship building in the most demanding of environments.

Personable, bright and articulate, Owen will educate, entertain and inspire any audience with his humility, genuine affection for the Afghan people and truly remarkable tales from the land where ‘empires go to die.’
Check Availability via Email